RECENT – NEWSWORTHY – CONNECTED
IN THE MEDIA

The company revealed it “intends to indicate upon publication of the issued patent that it is available for licence.”

The Ring of Fire is a large nickel and chromite mining deposit located more than 600 kilometres northwest of Timmins in the James Bay Lowlands near Webequie and McFaulds Lake. KWG owns large mining properties in the region.

Company CEO Frank Smeenk was pleased with the recent patent announcement, made in December.

“This is thrilling news for The Ring of Fire,” Smeenk said in a release. “We believe the direct reduction method can be combined with exceptionally low-cost Canadian energy to potentially provide this very large chromite discovery with tremendous production cost advantages,” he said.

“The award of this patent will enable us to now vigorously pursue an opportunity to further develop the process with pilot plant testing in one of the strategic locales that have been under consideration,” he said.

KWG is the operator of the Black Horse Joint Venture.

KWG also owns Canada Chrome Corporation, which has staked claims and conducted a surveying and soil testing program, originally for the engineering and construction of a railroad to the Ring of Fire.

KWG subsequently acquired intellectual property interests, including a method for the direct reduction of chromite to metalized iron and chrome using natural gas.

KWG subsidiary Muketi Metallurgical LP is prosecuting two chromite-refining patent applications in Canada, India, Indonesia, Japan, Kazakhstan, South Africa, South Korea, Turkey, and USA. The national phase filings are under review in each of those jurisdictions, the company said in a release.

Four Northern Ontario communities are being considered as a location for a chromite refinery by Noront Resources, the other major player in the Ring of Fire development. Sudbury, Thunder Bay, Sault Ste. Marie and Timmins are other cities being considered. 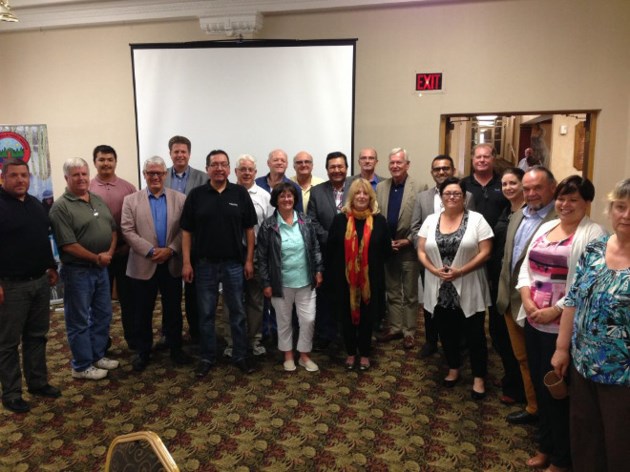 …Participating in the symposium on the corporate side were Aecon, ATCO, Bold Resources, Greenstone Gold, KWG Resources, Noront Resources, and Wabassi Resources…The event was deemed a success by all involved and community has plans to make the symposium an annual event geared to all the traditional land holders and companies in the area.

“We hope to provide this regional forum for engagement between mining companies, suppliers and First Nation members that will be used for providing project information and for partnership opportunities between companies and interested First Nations or their members,” said the release.

Marten Falls is the most mine-ready of the nine communities in the Matawa council and is being courted by the mine development companies with claims in the Ring of Fire.

The fly-in community of 250 is located 170 kilometres northeast of Nakina, and just east of where KWG Resources proposed a north-south rail corridor.

READ HOW ITS CONNECTED TO KWG   RAIL – MINE OPERATOR OWNERS: FIRST NATIONS AS FULL PARTNERS